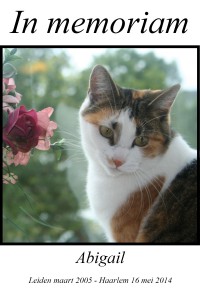 Last Friday I had to make the difficult decision to euthanize my dear cat Abigail. She had been ill for a very long time. In 2009 she was diagnosed with renal failure and from that time on she has had her ups and downs. Renal failure is a slow, but fatal condition. At the time of diagnosis the kidneys already had lost significant capacity to concentrate urine and filter waste products from the blood

In the five years that followed Abi has had several crises where she had to be hospitalized and take IV drips to help her get rid of the waste products that were slowly poisoning her, but time after time Abi recovered thanks to the great care at the clinic. This made it so difficult to make the decision that it had been enough, because you make decisions guided by your previous experiences and those experiences had taught me time after time that she would recover, even when it was looking so grim.

However, since the last crisis in February things had changed. When she came home that time she wasn’t the same anymore. She wasn’t the independent cat that live with me, but she was hiding often, and when was feeling a little better she only wanted to be at my side. If I was in another room she would call for me with a low meow that made me cry and it was clear that she was in pain. At the clinic they had taken röntgen photos that showed that Abi had many, large kidney stones and while previously IV drips had always helped Abi to recuperate and stabilize her, this time the creatinine and urea levels bounced back up immediately after stopping the IV drips.

To counter this Abi received SC fluids regularly and I learned how to give her SC fluids myself, but Abi hated it and after a few times it wasn’t possible for me to administer her SC fluids at home anymore. So, since April I was at the clinic every week for her SC fluids and at home I gave her tuna-lemonade to seduce her to drink more. Giving her the tuna-lemonade was a great pleasure. She showed how much she loved that by her enthusiastic meowing and running between the kitchen and her eating corner in the living room. I’m thankful to Dymphna at the clinic for giving this great tip.

Two weeks ago during routine checks of the urine a bacterial infection was found. On Friday of that week we started with antibiotics to fight the infection. However in the weekend Abi got ill and she threw up more violently than ever and stopped eating. On Monday I was back at the clinic and Abi had lost 300 grams in 3 days. She was dehydrated and got SC fluids again, but back home Abi was still feeling miserable and wouldn’t eat. On Tuesday she was hospitalized again and got IV fluids. She ate a little bit, but felt miserable at the clinic and I brought her home on Wednesday. Back home she wouldn’t eat until I gave her pain medication. Even then she was very reluctant to eat, but devoured the tuna I gave her.

Yesterday when we were preparing for the SC fluids Dymphna gave Abi’s a check-up and she found that her left kidney was much larger than before and probably shut down because a kidney stone or something else was blocking the drainage to the bladder through the ureter. We now knew what was giving Abi so much pain that she wasn’t eating anymore. The only way to help her was to hospitalize her again, but since she fought that so much only two days before I knew I didn’t want to let her go through that again. Even if she was hospitalized it would be doubtful if we could really help her. For me the decision was clear, Abi had fought her last battle and it was time to say goodbye. However clear it was that there was only one recourse, it still was a hard decision to make and I cried with my head against Abi when I was saying goodbye to her.

When it was time, Abi showed me that it was the right decision and that is was her time to go. She didn’t fight or protested against the sedative she was given and she passed away peacefully.

I would like to thank everyone at the clinic for their good care for Abi and the time they took to talk to me when I needed their guidance and help. Especially Jacqueline, who has been Abi’s vet since we moved to Haarlem; Kyra, who taught me how to give Abi SC fluids; Dymphna, who was always available for counsel and always looked for new treatment; Linda, who gave me advice on the phone many times; Lilian, who has been Abi’s caretaker when I was travelling and for whom no effort seemed too much, during one holiday even biking from Bennebroek to Haarlem-Noord twice a day to take care of Abi; Susan, Bente, Stephany and the other para-veterinary assistants who helped so much when Abi had a crisis. Thank you all, you’ve all been great!

This work by Esther van Enckevort is licensed under a Creative Commons Attribution-ShareAlike 4.0 International License.